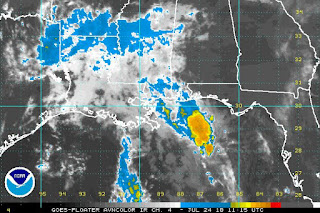 The latest satellite imagery indicates that Bonnie is still disorganized. The system is not producing substantial onshore winds yet along the Central Gulf Coast, and the latest NHC forecast questions if Bonnie will even redevelop into a tropical storm.

For these reasons, expect surge levels to be very low, less than 3 feet, in areas with onshore winds later today and tonight. As most communities in the impacted area are located at about 3 feet above sea level, this means that storm surge flooding of communities, roads, etc. is unlikely.

For some reason, the NHC still forecasts the possibility of a 4 to 6 foot surge (1 to 3 feet above ground level). Here is the surge information from the latest advisory (7AM CDT), issued about 10 minutes ago:

STORM SURGE...STORM SURGE WILL RAISE WATER LEVELS BY AS MUCH AS 1 TO
3 FEET ABOVE GROUND LEVEL ALONG THE IMMEDIATE COAST NEAR AND TO THE
RIGHT OF WHERE THE CENTER MAKES LANDFALL ON THE NORTHERN GULF
COAST.

This appears to be an overestimation of surge, based on historical comparison. Generally, historical records show that systems must be at least moderate tropical storms ( around 50 to 65 MPH winds), moving forward less than 15 MPH, to produce 4 to 6 foot surges. Bonnie will be a weak tropical storm, at best, and is moving too fast to pile up this much surge.

Tropical storms Brenda and Bertha, featured in the first Bonnie blog post, both generated surges within this range, but both produced winds over 60 MPH near the LA Coast, and were moving forward more slowly.

It is encouraging, however, to see the NHC using surge estimates above ground level, as this system should help the public get a better idea of surge levels in coastal communities in future surge events.
Posted by Hurricane Hal at 7:01 AM No comments:

Is Bonnie like Brenda? Brenda was a tropical storm that made landfall in eastern Louisiana in 1955, producing a 6 foot surge at Shell Beach, LA. Both storms may have similar landfall points. As Bonnie is still a depression, if it does redevelop, it may not happen until the system is just off the southeast coast of LA, in the similar region in which Brenda developed.

Brenda, however, moved slower, enabling the storm to build more surge. Also, Brenda was stronger than Bonnie should be. As Brenda approached eastern LA, winds exceeded 60 MPH. If Bonnie does redevelop into a tropical storm, max winds are likely to stay less than 45 MPH. So Brenna's 6 foot surge is likely higher than what we'd observe in Bonnie.

The latest surge info from the last NHC advisory on Bonnie, released at 10PM CDT tonight, predicts surge levels of as high as 2 to 4 feet above ground level...(adivsory is below)

STORM SURGE...STORM SURGE WILL RAISE WATER LEVELS BY AS MUCH AS 2 TO
4 FEET ABOVE GROUND LEVEL ALONG THE IMMEDIATE COAST NEAR AND TO THE
RIGHT OF WHERE THE CENTER MAKES LANDFALL ON THE NORTHERN GULF
COAST.

As most communities in extreme eastern Louisiana are around 3 feet above sea level, 2 to 4 feet above ground level means a 5 to 7 foot surge. This surge level would be similar to Brenda. However, Brenda was moving slower and produced stronger winds. Therefore, it is likely that NHC is overestimating surge levels.

Also, Brenda (and some similar storms) taught us that the peak surge can actually occur on west side of storm track, especially for storms that track in a NW direction and make landfall in E LA, or near the LA/ MS border. So don't be surprised to see peak surges to the west of storm track, perhaps in areas such as Shell Beach or Yschloskey. This is because the strongest winds in these events is from the east, which is not onshore in MS, but parallels the shore. This keeps water from piling up as much. In E LA, however, even in areas west of the storm path, strong winds from the E or NE actually pile water up from the Mississippi Sound.

Based on this historical comparison, we might expect Bonnie to produce a surge between to 2 to 4 feet if it does redevelop into a tropical storm. However, If Bonnie continues to weaken, just look for some choppy water and slight water rises along the central Gulf Coast.
Posted by Hurricane Hal at 11:47 PM No comments:

Bonnie downgraded to depression; possible weak surge along the LA, MS, or AL coasts this weekend

The NHC downgraded Bonnie to a tropical depression at the 4:00PM CDT advisory. The latest satellite loop, ending at 5:45PM CDT, indicates very poor organization. Circulation is not visible in this loop, and it appears as though Bonnie is dissipating.

Nonetheless, the official NHC forecast projects that Bonnie may once again form into a tropical storm. The track has moved a bit east, placing potential landfall near the LA/ MS border late Saturday night or early Sunday morning.

Based on historical comparisons, it appears unlikely that Bonnie will produce a surge 4 feet or greater along the U.S. Gulf Coast. If Bonnie does redevelop and make landfall in near the LA/ MS border as a tropical storm, it may be useful to compare Bonnie to Tropical Storm Brenda, from August, 1955. Brenda formed into the tropical storm south of the MS River Delta, then moved NW, making landfall near the LA/ MS border, producing a 6 foot surge at Shell Beach, LA. However, Brenda's wind speeds at the closest approach to Shell Beach were over 60 MPH, a wind speed that seems unlikely for Bonnie to obtain at this point. As Bonnie is forecast to become a minimal tropical storm, at best, one might conclude that Bonnie's surge would likely be lower, perhaps 1-3 feet.

An important observation from Brenda is that the point of greatest storm surge was actually on the west side of the storm track, instead of the usual east side. A similar situation occurred in November 2009, when Ida produced a 6.53 foot surge at Bay Gardene, LA, to the west of the storm track. This sometimes happens in eastern LA, as strong northeasterly winds that usually push water offshore along most of the Gulf Coast, actually can pile water up in places east of New Orleans or along the eastern levee of the MS River Delta. So if Bonnie does redevelop, don't count out several feet of surge in eastern LA, even if specific areas are on the "weak" (left) side of the storm. Areas experiencing onshore winds in MS or AL could also observe small surges.

The current NHC forecast map, as well as TS Brenda's 1955 track are included in this post.
Posted by Hurricane Hal at 6:27 PM No comments:

Discussion:
Storm surge levels should build in Southeast LA late Saturday, and peak Saturday night or Sunday morning, depending on the time of landfall. The estimate of peak surge level, based on historical comparisons, is 3-5 feet.

Look for water to pile up along the eastern border of the MS River Delta, areas east of New Orleans, and even western Lake Pontchartrain. Particular areas that may be affected include towns along the MS River Delta, such as Venice and Buras, communities east of New Orleans, such as Shell Beach, Yscloskey and Delacroix, and western portions of Lake Pontchartrain, around Frenier. Expect surge levels to increase as easterly winds pickup on Saturday.

Water tends to pile up quickly along this stretch of the U.S. Gulf Coast, because the water is very shallow, and easterly winds push water onshore along this stretch of coastline. Given the current NHC track, the strongest winds in this region should be from the east or southeast, enhancing surge levels. Fortunately, Bonnie is forecast to move quickly, so tropical storm force winds from the east should occur for less than six hours in most areas, limiting surge heights.

The SCIPP Program identified three historical surge events that may provide insight into Bonnie's peak surge levels. Information on these events is listed below, and tracking maps from the Unisys Corporation are included in this post. Bonnie's peak surge level should be slightly lower than these other historical events because the storm is moving so quickly, not enabling enough time for surge to build up very high.

An unnamed storm in 1940 tracked from east to west in the northern Gulf of Mexico. It passed south of Venice, LA as a tropical storm, then became a hurricane south of Grand Isle, eventually making landfall near the TX/ LA border. This system produced a peak surge level of 6.4 feet at Frenier, on the west end of Lake Pontchartrain, even though the center of this storm was never closer than 200 miles to Frenier! This is a testament to how efficiently water piles up along the western shores of Lake Pontchartrain, given a strong easterly wind. Even though this system became a hurricane, it was a tropical storm south of Venice, LA, so it is included in this historical comparison. This storm moved much slower than Bonnie, enabling east winds to persist for several days, which enhanced the surge.

TS Brenda formed off the SE coast of LA and curved towards NW, making landfall near Shell Beach, LA. This storm formed much closer to coast than Bonnie, but still was a Tropical storm that made landfall in SE LA, so it is a helpful comparison. Bonnie is tracking over more water, enabling higher surge levels, but moving faster, which should reduce surge levels.

Even though TS Bertha made landfall farther west than where Bonnie will likely make landfall, historical data from this storm is helpful because it was a TS for at least one full day and tracked from SE to NW, similar to Bonnie. The peak surge location was at Vermillion Bay, LA, probably farther west than Bonnie's peak surge.
Posted by Hurricane Hal at 8:42 AM No comments: 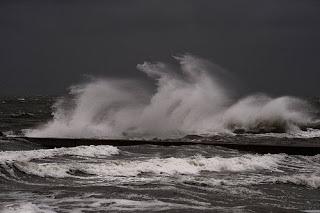 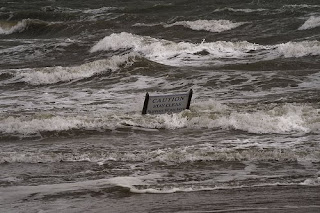 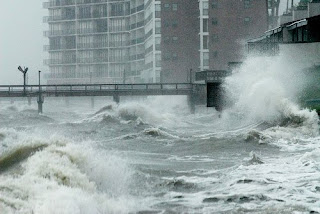 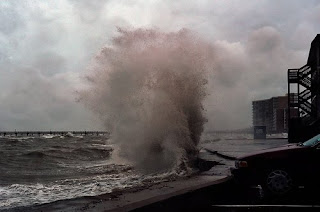 The Red Cross posted these pics from Corpus Christi, Texas. The pics are available on the Web at the following Flickr photostream:
http://www.flickr.com/photos/americanredcross/4754317847/in/photostream/
Posted by Hurricane Hal at 8:06 AM No comments: 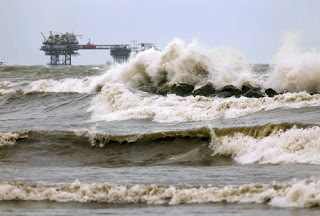 Do you have pics of Alex's waves or surge? Please submit them to the blog. Even if you took the pics far from Alex's landfall, perhaps on the Upper Texas or Louisiana Coasts, an archive of wave and surge pics from various locations would be helpful.

The pic I posted to the blog is the best I could find online. Hopefully we'll see some more.

What was the highest surge?

It is also possible that higher surges occurred along the Louisiana Coast, as strong onshore flow persisted for more than two days. Although this area was more than 500 miles from the storm's center, the water off Louisiana's coast is very shallow, which tends to build surge. The SCIPP program will investigate surge levels along the entire Central and Western Gulf Coast to try to find the peak surge level.

Do you have information on this surge event? Did you observe it personally? Did you read any information about specific surge levels in newspapers, blogs or National Weather Service/ National Hurricane Center updates? If so, please share that information through a blog comment. 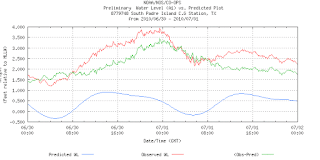 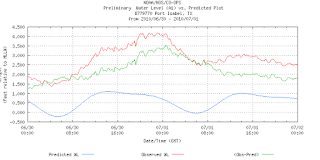 NOAA Tides and Currents data reports peak S TX surge levels of around 3.5 feet at both Port Isabel and South Padre Island. The green lines on the graphs above depict this level.
Posted by Hurricane Hal at 7:49 AM No comments: