A widespread storm surge event will impact the Eastern Seaboard later this week, as the complex interaction between Hurricane Joaquin, a pre-existing cold front, and a building dome of high pressure impact much of the Atlantic Coast with prolonged onshore winds and persistent rain.

The National Hurricane Center upgraded Joaquin to a hurricane as of the 8AM EDT advisory this morning. They forecast Joaquin to slowly drift westward towards the Bahamas through early Friday morning, before picking up forward speed and tracking to the north from Friday through Monday. 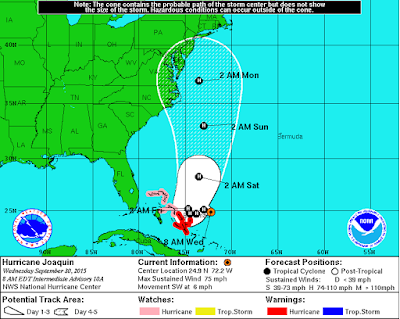 The National Hurricane Center upgraded Joaquin to a hurricane on the 8AM EDT advisory this morning. They forecast Joaquin to track up the Eastern Seaboard over the weekend and early next week. Image: www.nhc.noaa.gov.

Although many hurricanes that track up the Eastern Seaboard eventually curve towards the northeast and remain offshore, building high pressure over Eastern Canada may block Joaquin from making this turn. This scenario may force Joaquin to either track due north, or even take a turn towards the west, on a path that could potentially resemble that of Hurricane Sandy three years ago.

Regardless of Joaquin’s exact track, the strong dome of high pressure over Eastern Canada will set up a widespread pressure gradient, which will produce prolonged onshore winds along much of the Eastern Seaboard.  The GFS model output depicted in the image below, initialized at 06Z (2:00AM EDT) this morning, maps this strong gradient for a forecast 48 hours into the future (06Z or 2:00AM EDT on Fri Oct 2). The lines on this map, called isobars, depict lines of equal pressure. Tightly packed isobars indicate large pressure gradients and strong winds. 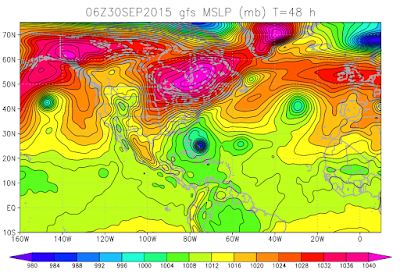 The GFS model depicts a strong pressure gradient to develop along the Eastern Seaboard, between Hurricane Joaquin to the south and a strong dome of high pressure over Eastern Canada. This model run was initialized at 06Z (2:00AM EDT) and predicts surface pressure for 06Z (2:00AM EDT) on Fri Oct 2. Image: me.met.fsu.edu/

The National Weather Service (NWS) Hourly Weather Forecast Graphs depict this prolonged wind event visually. The graph for the Atlantic City, NJ, (Point Forecast at Lat: 39.38N, Lon: 74.4W) depicts winds >= 20 mph to begin by 7:00AM EDT on Thu Oct 1 and continue until 12:00AM EDT on Sun Oct 4. The direction of these winds will range from NNE to E. If this forecast holds, it means that an onshore wind, capable of generating substantial storm surge, would exceed 20 mph for 65 consecutive hours. This graph also depicts winds >= 30 mph impacting this area for seven consecutive hours on Sat Oct 3. 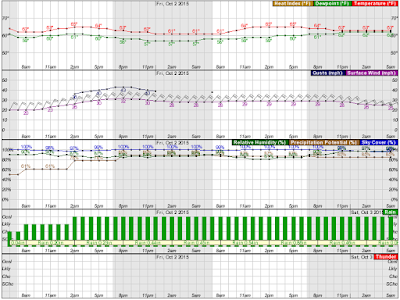 Such forecasts are subject to change, particularly in a complex situation like this one, as Joaquin’s exact track is unknown. Wind speeds should increase dramatically closer to Joaquin’s track. However, such a large pressure gradient between Joaquin and the massive high pressure to the north will mean that a widespread, prolonged onshore wind event is likely, regardless Joaquin’s exact track. This means that hundreds of miles of coastline will likely experience storm surge inundation, even if Joaquin stays offshore or makes landfall somewhere else. 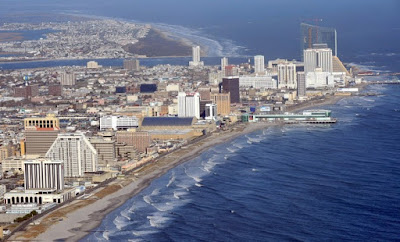 Heavy Precipitation will Exacerbate both Freshwater and Saltwater Flooding

Heavy precipitation is another factor that should increase Joaquin’s inland and coastal flooding potential. A low-pressure system tracked along a front on Tuesday, producing substantial rains over northern Virginia, the Mid-Atlantic States and New England.  Over the past 24 hours (as of 8:25AM EDT Wed Sep 30), more than 1.5 inches of rain fell across much of this region, with many areas observing more than 3 inches. 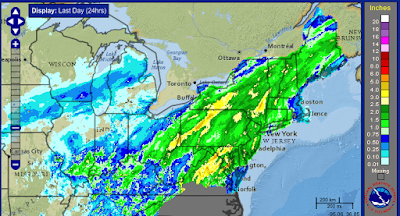 Accumulated rainfall for the 24 hours preceding 8:25AM EDT on Wed Sep 30.
Image: http://www.srh.noaa.gov/ridge2/RFC_Precip/.

Unfortunately, the NWS Weather Prediction Center forecasts more than 7 inches of rain to fall during the next five days over a broad area from North Carolina through Southern New Jersey, with amounts exceeding 3 inches across Northern New Jersey, Southern New York and eastern New England.

Such heavy rains increase the risk of multiple hazards. Obviously, more heavy rain from Joaquin falling on soil that is already waterlogged will produce fresh water flooding, as the soil cannot store any more water, increasing runoff into streams and rivers. Waterlogged soil also provides less support for trees, making it more likely that they will fall when struck by strong winds. 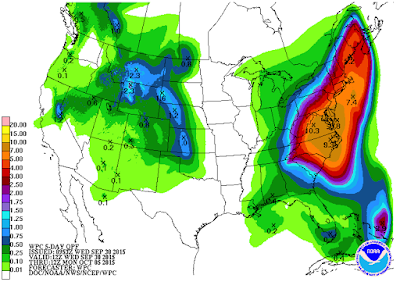 The NWS Weather Prediction Center forecasts more than seven inches of rain could fall in the next five days from eastern North Carolina through Southern New Jersey. Image: http://www.wpc.ncep.noaa.gov/.

From a coastal flooding perspective, waterlogged soil and excessive fresh water runoff exacerbates the impacts of storm surge events for several reasons. It is easier for a storm surge to push inland if the surge finds water levels already elevated in coastal wetlands, estuaries, tidal inlets and rivers. This past Friday evening while I was on a bayou in South Louisiana looking for alligators (it’s quite fun actually), two locals told me that Hurricane Ike’s surge in 2008 was particularly bad because it arrived only 12 days after Hurricane Gustav, and the water levels from Gustav had not yet fallen. New water accumulated on pre-existing water compounds flood potential.

Another complex problem related to heavy rain and storm surge is that rainfall drainage is usually gravity fed, depending on a slope between the land and the nearest water body. When a storm surge pushes inland and elevates the level of a bay, river or tidal inlet, fresh water drainage slows down considerably. In other cases, a storm surge can actually “dam” fresh water discharge near the mouth of a river, causing the river to actually back up and inundate inland communities. 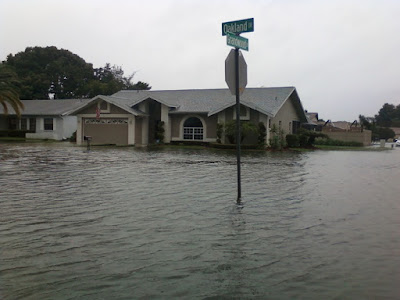 The compound interaction between heavy rainfall and storm surge exacerbated flooding from two tropical systems in 2012. Tropical Storm Debby produced surprising flooding near Tampa, Florida, in June of that season, followed by substantial flooding from Hurricane Isaac in late August in Louisiana. Isaac's surge elevated the surface of Lake Pontchartrain for more than 60 hours, hindering fresh water drainage from more than 15 inches of rainfall that fell across the region. 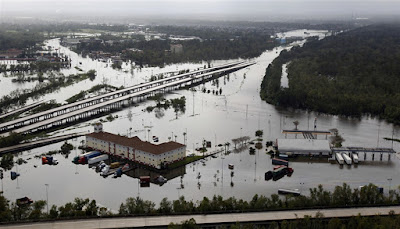 These interactions are complex and difficult to forecast. However, we do know that storm surge and heavy rainfall work together to compound flooding, and Wahl et al. (2015) recently found that this phenomenon is becoming more frequent, particularly along the U.S. Atlantic and Gulf Coasts.

Long story short, the combination of prolonged onshore winds and heavy rainfall preceding and accompanying the approach of Hurricane Joaquin, should generate substantial coastal flooding impacts along the Eastern Seaboard. Stay tuned to updates from your local National Weather Service and the National Hurricane Center for forecast updates on this developing event. I will attempt to update my blog frequently over the next week, as this complex situation unfolds. 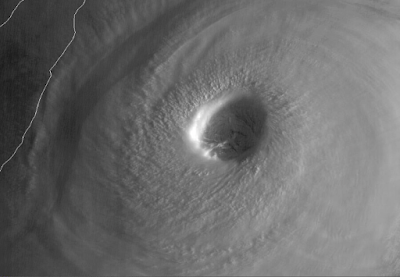 Dejuan's impressive size and structure was evident in this visible satellite image taken as the sun rose on Monday morning.
Source: @DanLindsey77

Radar and satellite loops depicted a large, powerful typhoon, which dumped tremendous rainfall on this mountainous island. As with other islands in the region, mudslides will be a major threat as heavy rains try to run off the steep terrain.

Most impacts from this storm appear to be from intense winds and heavy rain so far. Storm surge levels on Taiwan tend to be suppressed because the bathymetry, or offshore water depth, is deep, which does not allow water to pile up as efficiently. Also, Taiwan does not have as many defined bays and inlets as the Philippines, so water does not get funneled or trapped as efficiently. 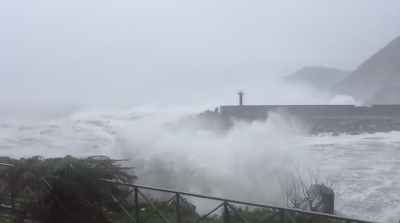 Although typhoons tend to generate modest storm surge levels on Taiwan, wave heights along the coast are often tremendous. This occurs because waves “feel the bottom” of the ocean and break their energy when they reach shallow coastal waters. On islands with deep bathymetry (and usually high mountains), like Taiwan and Hawaii, most of this wave energy remains intact until the waves are striking the shore. 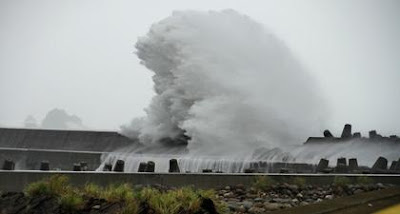