Tropical Storm Bill was blowing a storm surge into Matagorda Bay, Texas, this morning. As the center of circulation was located south the of the bay, sustained southeast winds were blowing water into the bay. Water levels at Port Lavaca were rising rapidly and approaching 3 ft above predicted tide levels after 11:00 AM CDT. 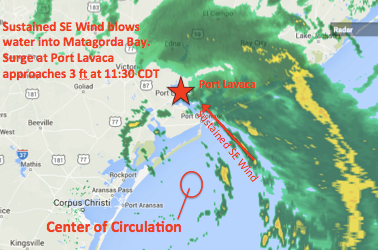 The National Hurricane Center predicts that storm surge could inundate coastal areas with 2 to 4 feet above ground level in coastal Texas if storm surges occur near the time of high tide. Bill's large circulation was pushing water levels above normal all the way from Corpus Christi, Texas, to portions of Louisiana.