Key Message
While Alberto’s highest storm surge levels so far have been observed between 2-3 feet in Cedar Key and Apalachicola, a rapid water level rise and higher storm surge levels are possible near and east of the landfall location this afternoon. The area threatened by sudden storm surge inundation includes Panama City and Panama City Beach, where winds should rapidly shift from offshore to onshore as Alberto approaches landfall. Prolonged onshore winds in this region near and after the time of landfall will keep storm surge levels elevated and inhibit the drainage of heavy rainfall, increasing the flood threat. 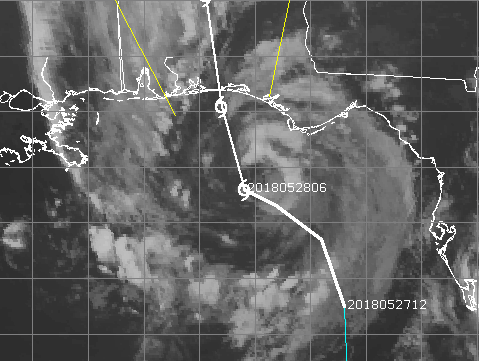 The center of Alberto's circulation is visible south of the Destin/ Panama City region in this 2 km resolution infrared satellite imagery from the University of Wisconsin/ CIMSS Tropical Cyclones Group. 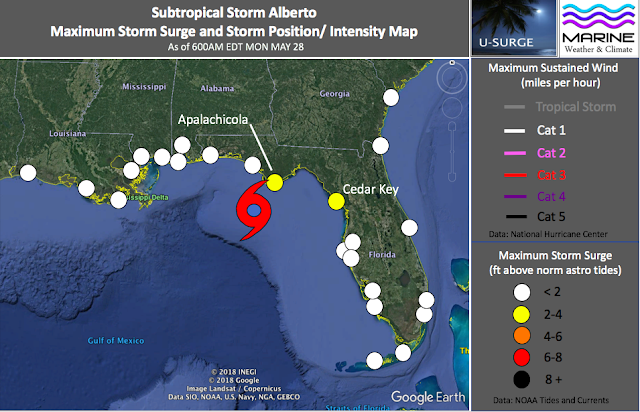 Total storm tide levels (storm surge + tide) at Cedar Key reached 2.62 ft at 1:30AM EDT and 2.58 ft at Apalachicola at 5:36AM EDT on Mon May 27. Coastal flood levels likely reached even higher levels between these two gauges, as southerly winds in this region efficiently pile up storm surge near the northern coast of Apalachee Bay, near St Marks.

The U-Surge project has identified high water marks from 35 hurricanes and tropical storms at Cedar Key since 1880. Alberto’s storm tide ranks 29th on the list. The high watermark in Apalachicola ranks 32nd among the 41 observed in events in U-Surge since 1900. 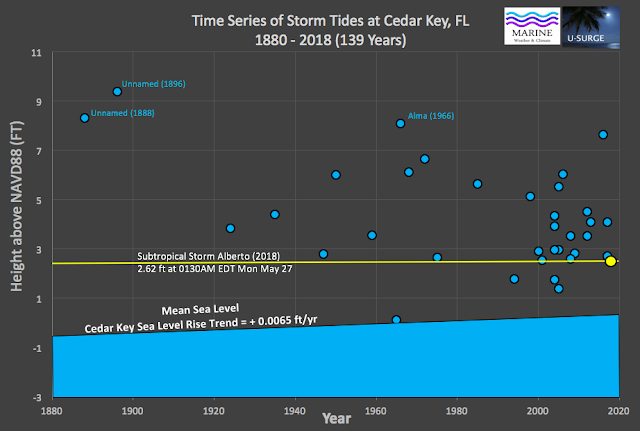 Subtropical Storm Alberto has generated a 2.62-ft storm tide at Cedar Key, Florida, which ranks 29th out of high watermarks from 35 hurricanes and tropical storms since 1880, according to the U-Surge Project.

Storm surge levels have remained less than two feet above normal in the Panama City area, as winds in the region have been blowing offshore at less than 20 mph overnight. However, a rapid water level rise is possible along this section of coast around the time of landfall, as winds shift from offshore to onshore.

The National Hurricane Center has issued a storm surge watch for Panama City, Panama City Beach, Mexico Beach, Lynn Haven and Bayou George, as the potential exists for 2-4 feet of storm surge inundation ABOVE GROUND LEVEL according to a statement from the National Weather Service in Tallahassee.

While storm surge has not yet overwashed the beach in Panama City, Florida, Alberto threatens this region with a rapid water-level rise closer to the time of landfall this afternoon. Image: WPMI/ WLUK-TV Fox 11.

Flash flooding is a real threat, particularly east of Alberto's track, where persistent onshore winds will generate a prolonged storm surge, which will inhibit the drainage of heavy rainfall. The National Hurricane Center forecasts more than 4 inches of rain to fall across portions of the Florida Panhandle and Alabama. 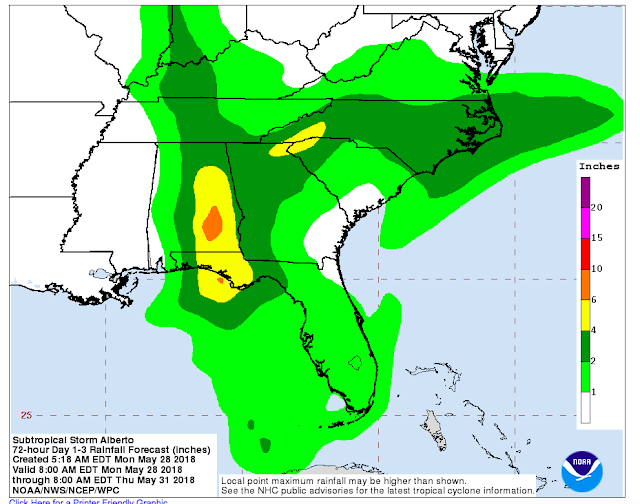 The National Hurricane Center forecasts more than 4 inches of rain to fall across portions of the Florida Panhandle and Alabama. Where prolonged onshore winds keep storm surge levels elevated east of Alberto's track, drainage of heavy rainfall will be inhibited, leading to greater flood threat.

Although Alberto is not forecast to reach hurricane strength before making landfall, the notion of a May hurricane striking the Florida Panhandle and Apalachee Bay region takes our thoughts back to Hurricane “Amanda” of 1863, the only May hurricane to make landfall in the U.S. The BAMS paper published by Chenoweth and Mock on this storm is a great read on this Memorial Day, as it covers both long-forgotten hurricane history and U.S. military history. The authors named the hurricane “Amanda” after a Union ship that was driven ashore during the Civil War.

I find Amanda a fitting name, as our current naming convention is alphabetical and a tropical cyclone forming in the Gulf of Mexico in May will likely start with the letter "A" (unless it's the second named storm).

Looking beyond the Gulf Coast, a devastating flash flood tore through Ellicott City, Maryland, yesterday, for the second time in two years. Floodwaters threatened both life and property following torrential rains.
Posted by Hurricane Hal at 6:22 AM 4 comments: