The National Hurricane Center forecasts a 90% chance that Potential Tropical Cyclone 16 will form into Tropical Storm Nestor in the Gulf of Mexico. The system is forecast to move rapidly to the northeast, spreading wind, rain and storm surge towards the northern Gulf Coast. The center of circulation should arrive along the Florida Panhandle Saturday morning. 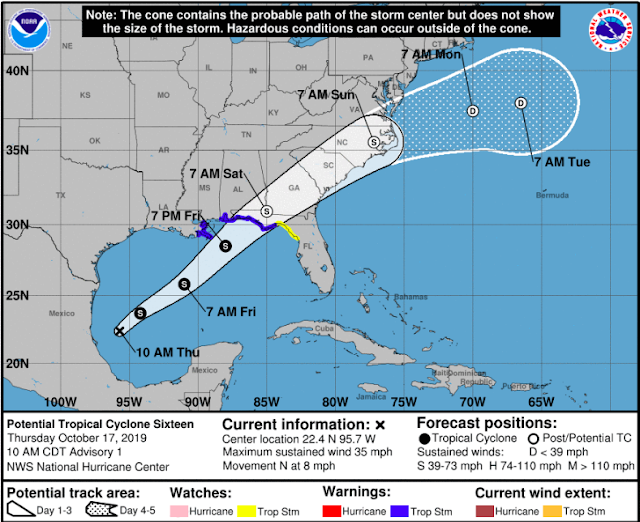 Rain and wind impacts may be felt in Southeast Louisiana, Mississippi and Alabama, while the Florida Panhandle may also experience some slight coastal flood impacts. Fortunately, Nestor's maximum sustained winds would likely peak around 50 mph, which is not strong enough to inflict substantial damage to buildings. The fast-moving storm would likely generate a minimal storm surge, which should remain below 3 feet.

Precipitation with this system could actually do more good than harm, as the fast-moving storm would likely dump from 1.5 to 3.0 inches of rain across much of the impacted region. The map below shows precipitation potential over the next five days. 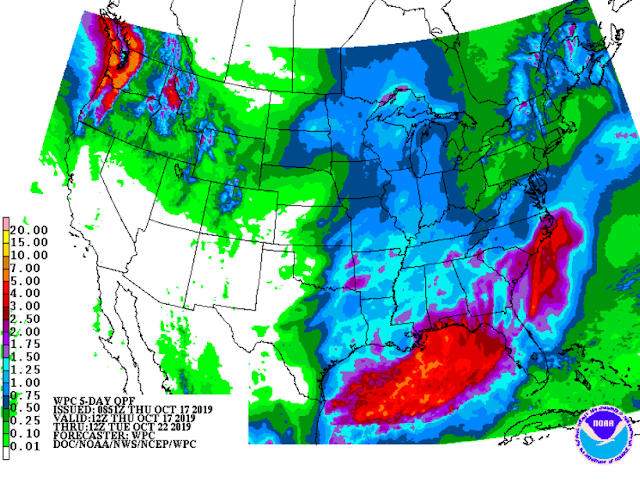 Precipitation map valid for the 5-day period from the morning of Thu Oct 17 to Tue Oct 22, from NOAA's Quantitative Precipitation Forecast (QPF) program.

These precipitation totals may be mostly beneficial, as much of the the southeast U.S. has been under the grip of a severe drought. Some locations in Alabama, Georgia, South Carolina and the Florida Panhandle are now classified in extreme drought (shaded red on map below), according to the National Drought monitor. A quick-moving tropical storm will provide much-needed moisture across a broad area of the country that is desperate for rain. 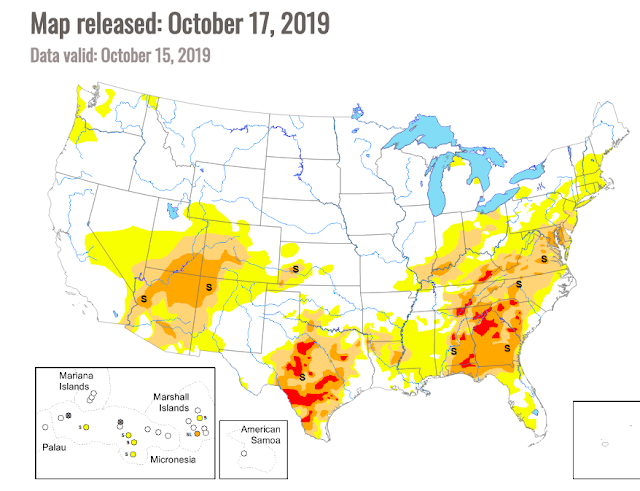 The National Drought Monitor released on Thu Oct 17, depicts much of the southeast U.S. in severe (dark orange) or exceptional (red) drought.


While we hope that this storm will be a blessing and provide much-needed drought relief, the storm's forecasted track should remind us that the eastern Gulf of Mexico, particularly the Florida panhandle and Florida's west coast, are quite vulnerable to tropical cyclone impacts in the month of October. At this time of the year, cold fronts often push off the northern Gulf Coast, causing tropical systems to deflect to the east or northeast.

Just last October, category-5 Hurricane Michael made landfall near Panama City, Florida, in a location that may be similar to a landfall location for potential Tropical Storm Nestor. Fortunately, Nestor would have little in common with Michael, and will hopefully do more good than harm.