This morning, Hurricane Fred was centered in the midst of the Cape Verde Island chain, off the west coast of Africa. Fred's sustained winds were estimated at 80 MPH (129 KPH). Typically, hurricanes form farther west in the Atlantic, as tropical waves (atmospheric waves, not oceanic) move from east to west off the coast of Africa. 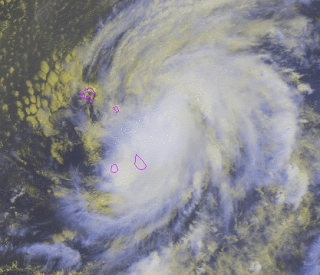 Hurricane Fred has quickly intensified to a category-1 hurricane centered in the midst of the Cape Verde Islands. At this time, Fred's maximum sustained winds are estimated at 80 MPH (129 KPH).
Image: http://www.ssd.noaa.gov/PS/TROP/floaters/06L/imagery/rgb0.gif 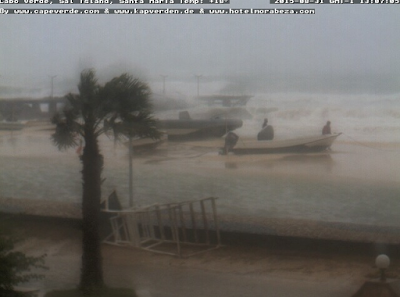 Fred's storm surge was beginning to inundate the beach at Santa Maria, on the Cape Verde island of Sal.
Webcam source: http://www.capeverde.com/live-webcams/sal-pontao-zoom.html

If you're a physical geography buff, with an interest in the coast, it is clear that Fred's storm surge is pushing water past the typical swash zone, and the runnels are filling with water. At this time the ridge, or swash bar, at Santa Maria, is not yet inundated. A few boats are resting on the swash bar, and we can only wonder if Fred's surge will eventually wash them off. (See graphic below for beach profile that shows the location of runnels and swash bar.)

Physical profile of a sandy beach. Fred's storm surge is pushing water past the typical swash zone and filling runnels with sea water. At Santa Maria the swash bar appears wet but not inundated at this time.
Image: http://classconnection.s3.amazonaws.com/114/flashcards/1546114/png/beach1337143672563.png


The total storm tide (surge + tide) at this location may be around 2 ft (0.61 m) above Mean Sea Level (MSL), but that's just an estimate. Sometimes high waves cause additional flooding from a process called "wave runup," in which the water from wave #1 has not yet retreated before the water from wave #2 arrives. In such cases, even a small storm tide of 1-2 feet can start inundating low-lying areas because of the additional water provided by the waves.

As Fred has intensified pretty quickly from a tropical wave to a tropical storm and then a hurricane, we should not expect excessive storm surges on the Cape Verde Islands. It takes awhile for hurricanes to displace sea water, and Fred's 12 MPH (19 KPH) forward speed should move it past the islands before it has a chance to generate surges exceeding 3 or 4 feet.

Why It's Misleading to Label Katrina as a "Category-3" Hurricane

This blog discusses storm surge from a data-driven perspective. Information in this blog should be used for educational purposes only. For decision making, consult the National Hurricane Center's storm surge forecast, or weather/ marine products provided by your local National Weather Service Forecast Office. Therefore, information on this site should not be used for decisions included, but not limited to, evacuations, storm preparations, insurance claims, or any decisions that may result in loss of life, injury, or personal, corporate or public economic losses. All personnel associated with Marine Weather and Climate LLC, including Hal Needham, or "Hurricane Hal", are not liable for any decisions that lead to injury, death, or any personal, corporate or public losses, including economic losses associated with tropical storms, hurricanes or storm surge events.