While Tropical Storm Cindy's torrential rains have grabbed the headlines, coastal flooding in Southeast Louisiana and Mississippi inundated some communities with saltwater.

Cindy generated widespread 2-4 foot storm surges in the region, with a localized maximum exceeding 6 feet at Shell Beach, Louisiana. The highest storm surge levels occurred east of the Mississippi River, even though the center of circulation has been moving to the northwest, with a likely landfall location near the Texas/ Louisiana border. 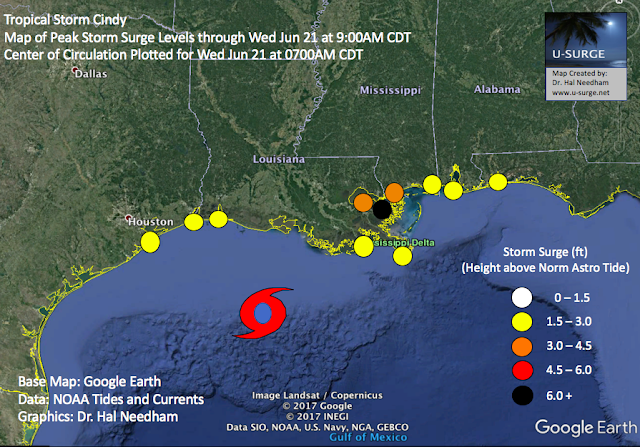 Wind and water observations for Shell Beach provide insight into the localized nature of storm surge. Water levels peaked following a period of sustained winds from the northeast. This wind direction pushes water directly into Shell Beach, which may seem unusual as we may picture onshore winds along the northern Gulf Coast blowing from the south. 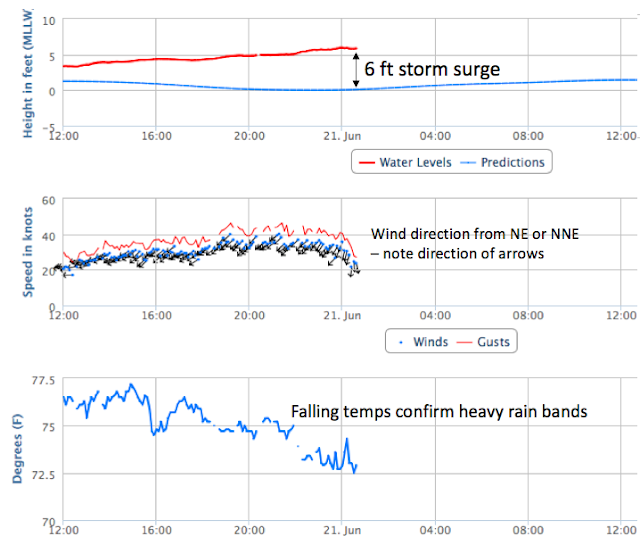 
However, Shell Beach is actually exposed to the northeast, so Cindy provided an ideal wind direction to pile up storm surge.  As Tropical Storm Ida passed to the east in November, 2009, Shell Beach observed peak water levels as winds blew from the north-northeast, even as this wind direction caused surge levels to fall in nearby coastal Mississippi. Shell Beach broke all kinds of rules during Ida- it even observed the highest storm surge record for the storm, although it was located to the LEFT of the storm track. 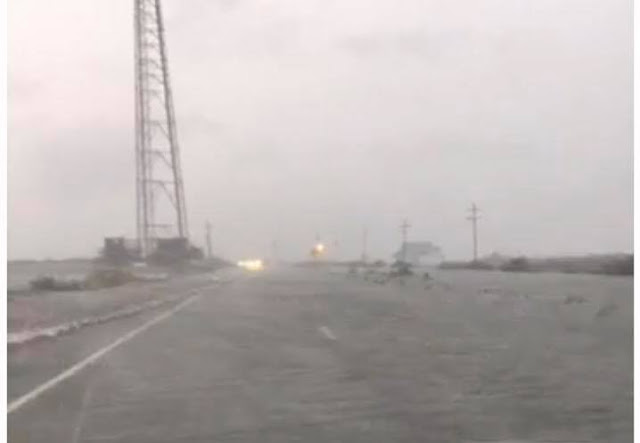 I will try to take the ferry to the Bolivar Peninsula this evening to observe any coastal flooding before sunset. This location, northeast of Galveston, has experienced substantial coastal erosion during previous decades, and observed the highest water level for Hurricane Ike.

The table below provides estimated peak storm surges for Tropical Storm Cindy through 900AM on Wed Jun 21. Data provided by NOAA Tides and Currents:

Tropical Storm Cindy has developed in the central Gulf of Mexico.  Torrential rains from Louisiana through the Florida Panhandle will grab the spotlight, as destructive winds should not develop and coastal flooding remains minor. 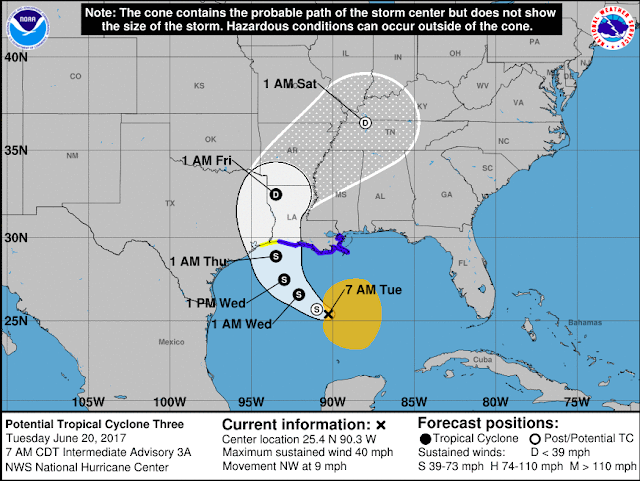 The 7:00AM National Hurricane Center (NHC) advisory places the center of circulation for Potential Tropical Cyclone 3 approximately 300 miles south of Morgan City, Louisiana. The NHC forecasts this system to become better organized into a tropical storm and track towards the northwest.

Note the area of tropical storm force winds depicted on the map above. These winds are offset from the center due to southwesterly wind shear. Typically when winds are offset from the center like this, they do not provide consistent coverage over the entire area, but are more found in the heavier squalls. This means that the system is not producing a wide enough coverage of strong winds to generate substantial coastal flooding. 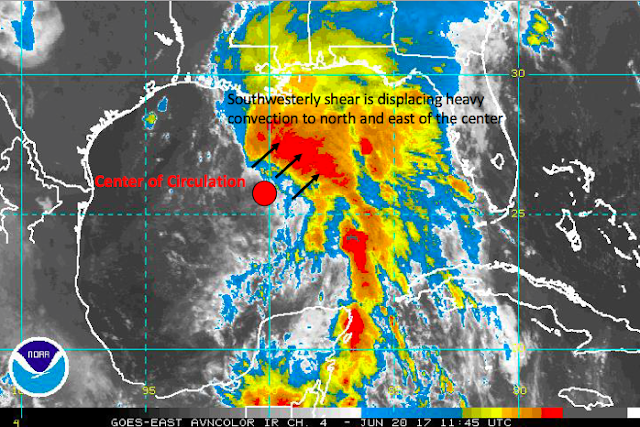 Southwesterly wind shear was displacing the heaviest convection to the north and east of the center of circulation for Potential Tropical Cyclone 3 this morning. Background image: NOAA, Markups: Hal Needham.

This offset should occur for two reasons: 1) Most of the convection is offset to the north and east; 2) Coastal Mississippi and the area of Louisiana east of the Mississippi River is more efficient at piling up storm surges than areas to the west, near Morgan City or Cameron.

Regardless of coastal flood impacts, the torrential rain of this system will grab the headlines. NOAA's Quantitative Precipitation Forecast (QPF) map depicts a broad area of rain from East Texas through the Florida Panhandle exceeding four inches, the localized amounts exceeding 10 inches through Friday morning. 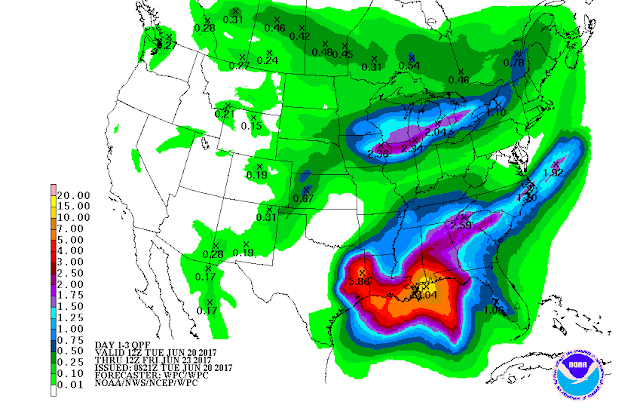 NOAA QPF- precipitation potential map depicts the possibility of 10 or more inches of rain in localized pockets along the northern Gulf Coast.


Keep in mind that "weaker" tropical cyclones, such as minimal tropical storms, often generate heavier rainfall totals than better developed tropical storms and hurricanes. This is counterintuitive to most people, as we may assume that all hazards are worse during higher "category" cyclones. However, weaker tropical storms are not as well developed vertically so they do not tap into the upper level steering winds that would generally give them a faster forward motion. So they tend to stick around for awhile.

The biggest concern is in areas that observe "training" of persistent rain bands well to the east of the center of circulation.

Gulf Coast residents should be well aware that we do not need a strong tropical storm or a hurricane to generate substantial flooding. Last August, a hybrid tropical low that was an unnamed storm dumped more than 30" of rain in portions of South Louisiana near Baton Rouge. 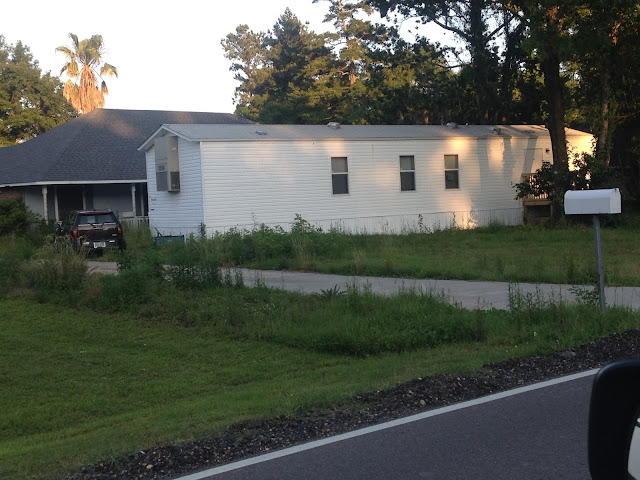 Trailer in front of a home near Denham Springs, Louisiana. Photo taken by Hal Needham in May, 2017.


Residents in South Louisiana are still cleaning up from this catastrophic flood, which inundated tens of thousands of buildings. Last month I drove through Denham Springs, Louisiana, one of the worst impacted areas, and was saddened to see many people still cleaning up and living in trailers on their property.

Let's hope the forecasted heavy rains do not repeat flooding in these hardest-hit areas.
Posted by Hurricane Hal at 8:29 AM 1 comment:

If this system develops it would be the third named storm of the Atlantic Hurricane Season, named Cindy. 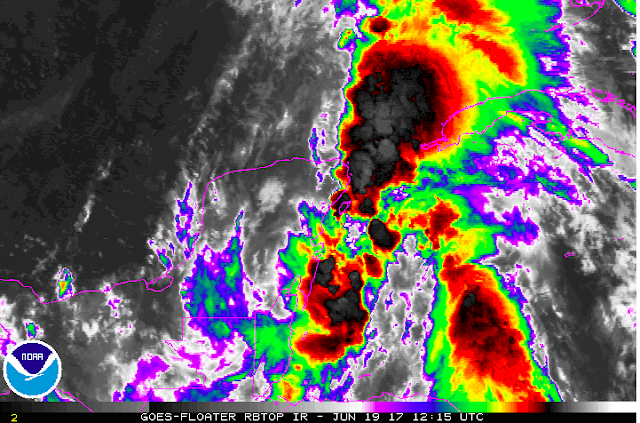 Deep convection firing near the northern Yucatan Peninsula will likely develop into a tropical cyclone in the Gulf of Mexico in the next two days, according to the National Hurricane Center.

The two models are showing more consensus this morning, as they are splitting the difference. The European model favors a forecast track into the west-central Gulf of Mexico by Tuesday evening local time, which would bring onshore winds possibly exceeding tropical storm force into southeast Louisiana. 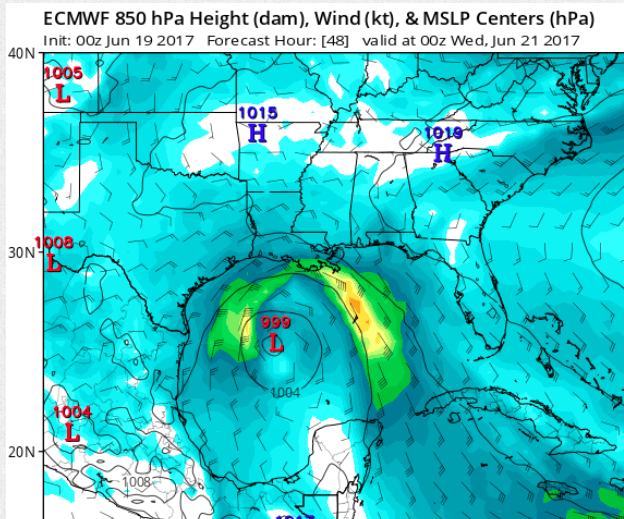 Note the strong (30 kt) shore-parallel winds forecast for coastal Texas. Such winds effectively generate coastal flooding due to Texas' coastal profile and Ekman transport, which turns water to the right of the wind direction in the Northern Hemisphere. Therefore, this scenario would cause minor coastal flooding from the Florida Panhandle through coastal Texas. In this scenario, minor coastal flooding would occur from extreme southeast Louisiana through the Florida Panhandle, with offshore winds generating lower-than-normal water levels from south-central Louisiana through much of the Texas coast.

It is important to not follow the precise track at this point, as the forecast will become more refined throughout the day Monday. Regardless of where the system tracks, it is looking more likely that some locations along the U.S. Gulf Coast will observe coastal flooding late Tuesday into early Wednesday.
Posted by Hurricane Hal at 8:06 AM 1 comment: