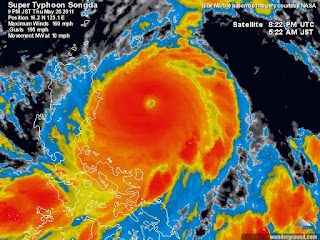 Category-5 Super Typhoon Songda kicked off the typhoon season in the Western North Pacific this week. As of 0500 JST on Thursday, May 27, Songda was packing winds of 160 mph off the east coast of the Philippines. Songda is generating very high waves throughout much of East Asia, including the Philippines, Taiwan, and Southern Japan.

SURGEDAT has identified the maximum surge height and location of 66 surge events in East Asia between 1880 and 2010, however, lacks surge data for the Philippines. If you have information about the surge or wave heights for Songda or any other typhoons that have impacted the Philippines, please send observations, photos or video to Hurricane Hal at hneedh1@lsu.edu.

Stay safe and stay tuned to Hurricane Hal's Storm Surge Blog throughout this tropical season!
Posted by Hurricane Hal at 3:42 PM No comments:

The 2011 Atlantic Hurricane Season is nearly upon us! Hurricane season officially begins on June 1 and lasts until the end of November. This hurricane season should be a busy one as the National Oceanic and Atmospheric Administration (NOAA) predicts that the 2011 season will be more active than normal. NOAA is forecasting 12 to 18 named storms, 6 to 10 hurricanes, and 3 to 6 major hurricanes this season (National Oceanic and Atmospheric Administration, 2011).

The image posted to this blog depicts why this season may be more active than normal. This image indicates sea surface temperature anomalies, or how much warmer or colder sea surface temperatures are compared to normal, as of May 5, 2011. Much of the Atlantic basin, particularly the main development region for hurricane formation, is warmer than normal, which can lead to increased hurricane activity, as warm waters fuel hurricane development and growth. Much of the Equatorial Pacific Ocean, however, remains cooler than normal, setting up a La Nina pattern that generally reduces wind sheer in the Atlantic basin, providing a more conducive atmosphere for Atlantic hurricanes.

If the Atlantic hurricane season turns out to be an active one, stay tuned to the storm surge blog frequently. Although the focus of this blog is surge discussion for the U.S. Gulf Coast, look for a few surprises this year as the blog branches out to shed light on other high-profile surge events in other parts of the world too!