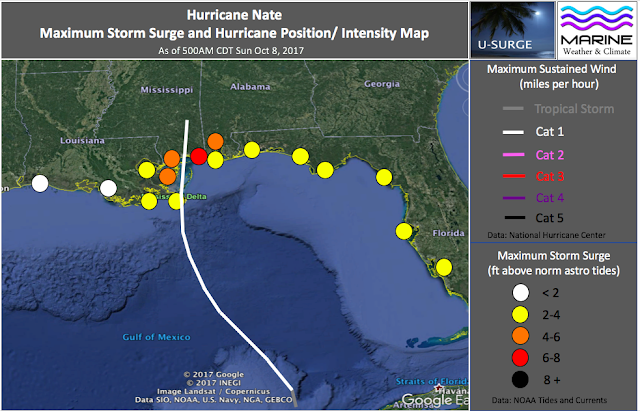 Nate made landfall as a category-1 hurricane twice. The first landfall occurred in southeast Louisiana, near the mouth of the Mississippi River, and the second landfall occurred near Biloxi, Mississippi. The 400AM Central Time advisory from the National Hurricane Center downgrades Nate to a tropical storm, but beware of continued strong squalls to the east of the center of circulation.

Storm surge levels should drop through the morning along the northern Gulf Coast. 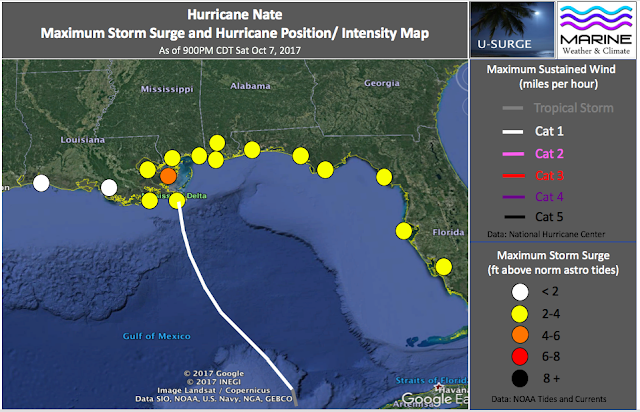 As of 900PM Central Time, Hurricane Nate has generated a widespread 2-4 ft storm surge along the Gulf Coast. Peak surge levels have now exceeded 4 ft at Shell Beach, Louisiana, and continue to rise in this location.

These storm surge levels do NOT include normal astronomical tides, which are peaking this weekend in the region due to the full moon. These king tides are among the highest tides of the year, and are not included in these storm surge observations.

Therefore, give a buffer for additional flooding because tides would normally be unusually high even if there wasn't a hurricane in the Gulf.


Posted by Hurricane Hal at 9:40 PM No comments:

As Hurricane Nate races towards the northern Gulf Coast, the National Hurricane Center's (NHC) 1PM (Central Time) advisory predicts maximum storm surge levels to reach 7-11 feet from the Mouth of the Mississippi River east to the Mississippi/ Alabama border, 6-9 feet along the Alabama Coast, and 4-6 feet for the Western Florida Panhandle, including Pensacola, as well as the area west of the Mississippi River, to Morgan City, Louisiana.

Visible satellite image of Hurricane Nate as of 11:15AM Central Time on Sat Oct 7, 2017


Although Nate is forecast to make landfall as a category-2 hurricane, these estimates are wildly over-estimated for several reasons:

1) Nate is RACING to the coast at an incredible 25 mph. This is more than twice the forward speed at which hurricanes typically approach the coast in this part of the world. Strong onshore winds need ample time to push water towards the coast, and Nate's rapid forward speed means it will make landfall before it has the chance to generate a substantial storm surge.

2) Nate is strengthening as it approaches the coast. I was lead author on a paper published three years ago that found storm surge correlates better with pre-landfall wind speeds than wind speeds at landfall, with the optimal correlation occurring 18 hours before landfall. So even if Nate makes landfall as a category-2 hurricane, 18 hours before landfall wind speeds were around 80-85 mph, making it an "average" category-1 hurricane when the time was most important for storm surge generation. 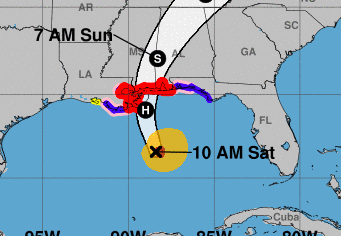 Nate's small wind field will keep it from generating a massive storm surge. This graphic from the NHC depicts hurricane-force winds as red and tropical storm force winds as light orange, as of 10AM Central Time on Sat Oct 7.


Compare that with Hurricane Ike (2008), which approached the Upper Texas Coast as a high-end category-2 hurricane with hurricane-force winds extending 120 miles and tropical storm force winds extending 275 miles from the center of circulation, enabling Ike to generate a massive storm surge.

4) Nate's wind field has consistently been asymmetric, or offset, during it's journey through the Yucatan Channel and into the Southern Gulf of Mexico. Strongest winds have been offset to the east of the center. Given the predicted track, maximum sustained winds should stay east of the Louisiana Delta, and I cannot understand the rational for predicting 4-6 feet of storm surge west of the Mississippi River. The Mississippi River Delta does a good job of protecting points west, like Grand Isle and Morgan City, from storm surge even in a well-organized system- it is very unlikely that Nate will generate a storm surge higher than 3 ft in these areas.

Marine Weather and Climate runs the U-Surge project, which essentially serves as the U.S. storm surge database. I have personally been constructing storm surge databases for the past 10 years, and, based on that work, I would like to offer a storm surge forecast of my own, from a data-driven perspective.

Here is a comparison of my Marine Weather and Climate storm surge forecast compared to the NHC forecast, from west to east:

Much thanks to the NHC for their hard work and for rolling out improved products in recent years. I like what they do and value their work.

I believe in the power of having multiple voices/ forecasts as a big storm approaches. This helps the public discern levels of certainty for a given hazard, like rainfall, wind or storm surge. If all forecasters provide the same message, certainty is higher than if different messages are heard.

I realize I will probably get my "hand slapped" for publicly disagreeing with the NHC on Nate's storm surge potential. In the days leading up to Harvey I got my hand slapped for not sticking with "one consistent message" when I published a blog post titled, "Harvey's Compound Rain/ Surge Flooding Could be Catastrophic and Underestimated- Especially along the Houston-Galveston Corridor", 36 hours before all hell broke loose in Houston.

However, Harvey was unbelievably catastrophic in my neck of the woods, and I have no regrets whatsoever for speaking my mind. For every hate message, I received hundreds of messages from people thanking me for speaking clearly and truthfully, and many thanking me for helping them make "life-saving decisions". Harvey taught me to speak my mind and not care what people think.

I do realize the NHC errs on the side of over-estimating storm surge potential to encourage people to evacuate and take precautions, but the down side to this is that it lowers public confidence when forecasts are consistently more extreme than the reality on the ground.

I believe the best approach is to predict hazards as accurately as possible and communicate this as clearly as possible with the public. Most people are smart and they will do what is necessary to protect their families and communities when given clear, accurate predictions.

For questions or comments on Nate's storm surge, you can reach me at: hal@marineweatherandclimate.com.