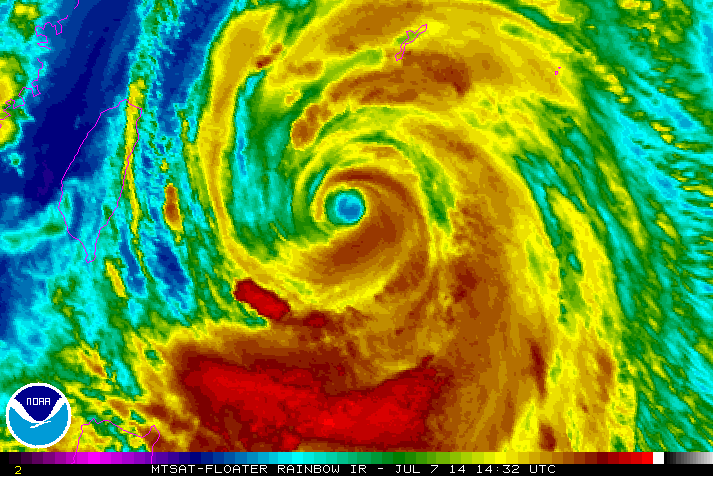 Super Typhoon Neoguri is a powerful typhoon packing winds of 130 kts (150 mph). The cyclone is forecast to strengthen to a category-5 typhoon, with winds reaching 140 kts (161 mph) as it tracks towards Japan. Image:NOAA

Super Typhoon Neoguri is now a well-developed tropical cyclone, packing winds of 130 knots (150 mph). The Joint Typhoon Warning Center forecasts strengthening of this typhoon, as maximum sustained winds may reach 140 knots (161 mph), while it tracks west of Okinawa. Such intensification would make Neoguri a category-5 hurricane if it were located in the Atlantic Ocean.

This typhoon is forecast to track W of Okinawa, before curving towards the NE and making landfall on the Japanese Island of Kyushu. Although Neoguri is forecast to weaken to a category-3 typhoon by landfall, storm surge correlates better with pre-landfall winds than wind speeds at landfall (Jordan and Clayson 2008; Needham and Keim 2014), so a relatively large storm surge may still occur.

Super Typhoon Neoguri is forecast to pass W of Okinawa as a category-5 tropical cyclone, then curve towards the NE, before making landfall as a major tropical cyclone on the island of Kyushu, Japan. Source:Weather Underground

Bart generated a 3.5 m (11.5 ft) storm surge in Yatushiro Bay (Kawai et al. 2009), which tied it for first place with Typhoon Vera in 1959 as the highest storm surge in Japan’s history, according to SCIPP's global SURGEDAT dataset. SURGEDAT has identified the location and height of 11 historical storm surge events in Japan since 1911. Unfortunately, Bart’s surge peaked near the time of a spring high tide, which further exacerbated storm surge flooding. This enabled flood waters to reach the roofs of one-story houses, while the surge claimed 12 lives (Kawai et al. 2009). 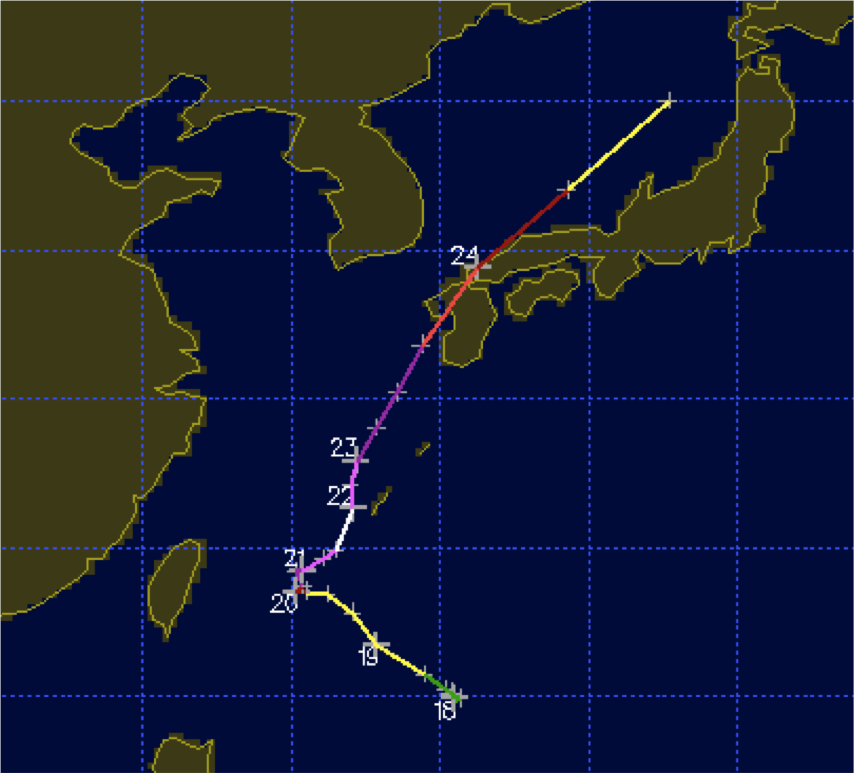 Super Typhoon Bart (1999) followed a similar track and had similar intensity as the forecast track and intensity of Super Typhoon Neoguri. Bart passed west of Okinawa as a category-5 typhoon, and then weakened to a category-3 typhoon with winds of 100 kts (115 mph) at landfall on Kyushu, Japan. Map Source: Unisys Corporation.

However, when Bart made landfall on Kyushu, it passed just west of Yatushiro Bay, enabling the storm to push a tremendous amount of water into the bay on strong southerly winds. We still do not know if Neoguri will take a similar track. If Neoguri tracks farther east, for example, it would pass to the east of Yatushiro Bay, enabling the strongest winds to blow offshore out of the bay. Therefore, while Bart's surge history may provide some general insights about surge potential from Neoguri, slight differences in typhoon track may result in large differences in surge heights at specific locations. 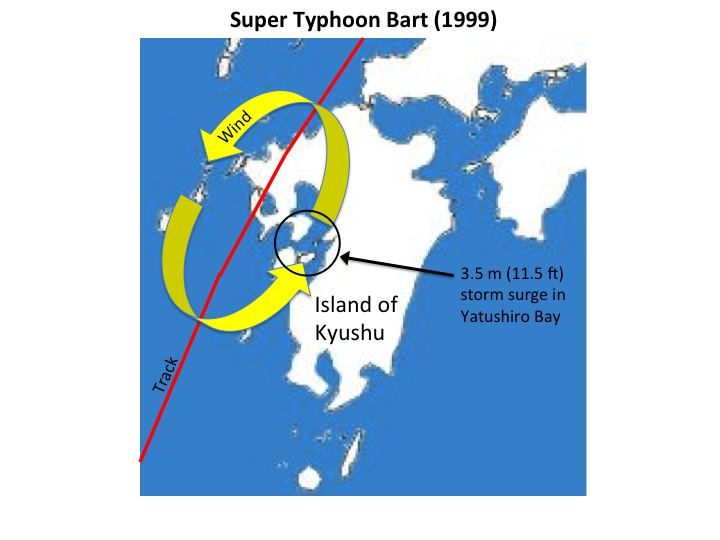 On island nations like Japan and the Philippines, a slight change in a typhoon track can change surge levels at a particular location dramatically. Deep inlets and bays, as well as jagged island coastlines oriented in different directions makes surge levels very localized in these countries. This was made obvious last autumn, when powerful Super Typhoon Haiyan generated a catastrophic, but localized storm surge in the Philippines. Bays and inlets near the location of landfall greatly enhanced surge levels around places like Tacloban, which observed a wall of water more typical of a tsunami than a storm surge.

Neoguri will be monitored very closely and slight changes in track forecast will likely result in large changes in storm surge heights. Coastal populations should be aware that storm surge in such situations is very localized, as one location may observe a high storm surge, but another location 20 km away may observe little or no storm surge. The most vulnerable areas to surge will be locations that are exposed to strong, onshore winds.

Hurricane Arthur was bearing down on North Carolina this evening as a category-1 hurricane with maximum sustained winds of 90 mph, according to the National Hurricane Center. They predict that Arthur may intensify to a category-2 hurricane at landfall or it's closest approach to the coast. 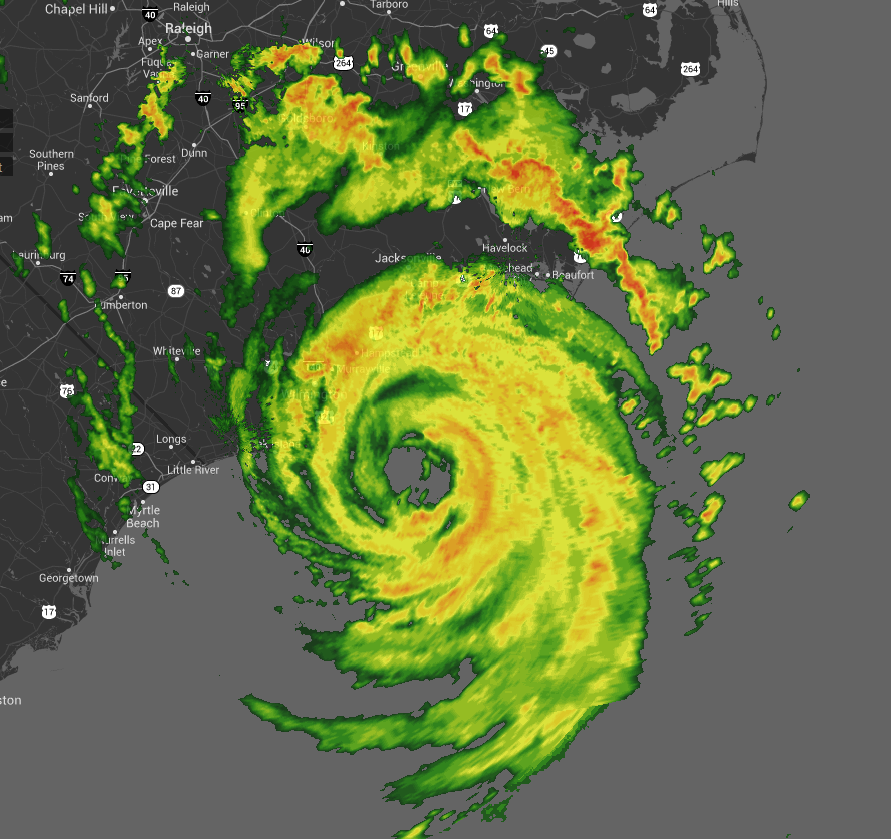 The National Hurricane Center forecasts that storm surge could inundate land areas, reaching the following heights if the timing of peak surge occurs at high tide:

Keep in mind, those are not storm surge heights above mean sea level, but actually above ground level.

Extensive storm surge history is available for North Carolina, as this region is familiar with visits from hurricanes and tropical storms. The Program for the Study of Developed Shorelines at Western Carolina University has developed an extensive dataset, as well as an interesting fact sheet about historic storm surges in North Carolina. This page is called, Cataloging all Available Storm Surge Measurements for the State of North Carolina: The National Storm Surge Database, and is available on the Web at: https://shoreline.wcu.edu/Katie/SS_SEGSA_2011.pdf.

The Program for the Study of Developed Shorelines at Western Carolina University has developed extensive storm surge data and mapping capabilities, as well as useful information about past surges in North Carolina

This website shows the capabilities of their database combined with GIS mapping, which enables them to consider how storm surge is affected by various hurricane parameters, like hurricane track and angle of a hurricane's approach to a coastline. In regards to North Carolina storm surges, they provide a top 10 list of high water marks available in their dataset, including the following observations, which were the highest in North Carolina for each of these hurricanes:

SCIPP has also developed mapping work that provides historical storm surge/ storm tide heights, as well as the tracks of historic hurricanes that produced such high water marks. For example, the image below is a SCIPP map of Hurricane Hazel's track and high water marks in 1954. This map is not intended to be a comparison to Arthur's storm surge in any way, but rather a snapshot of the capabilities of this database and mapping work. 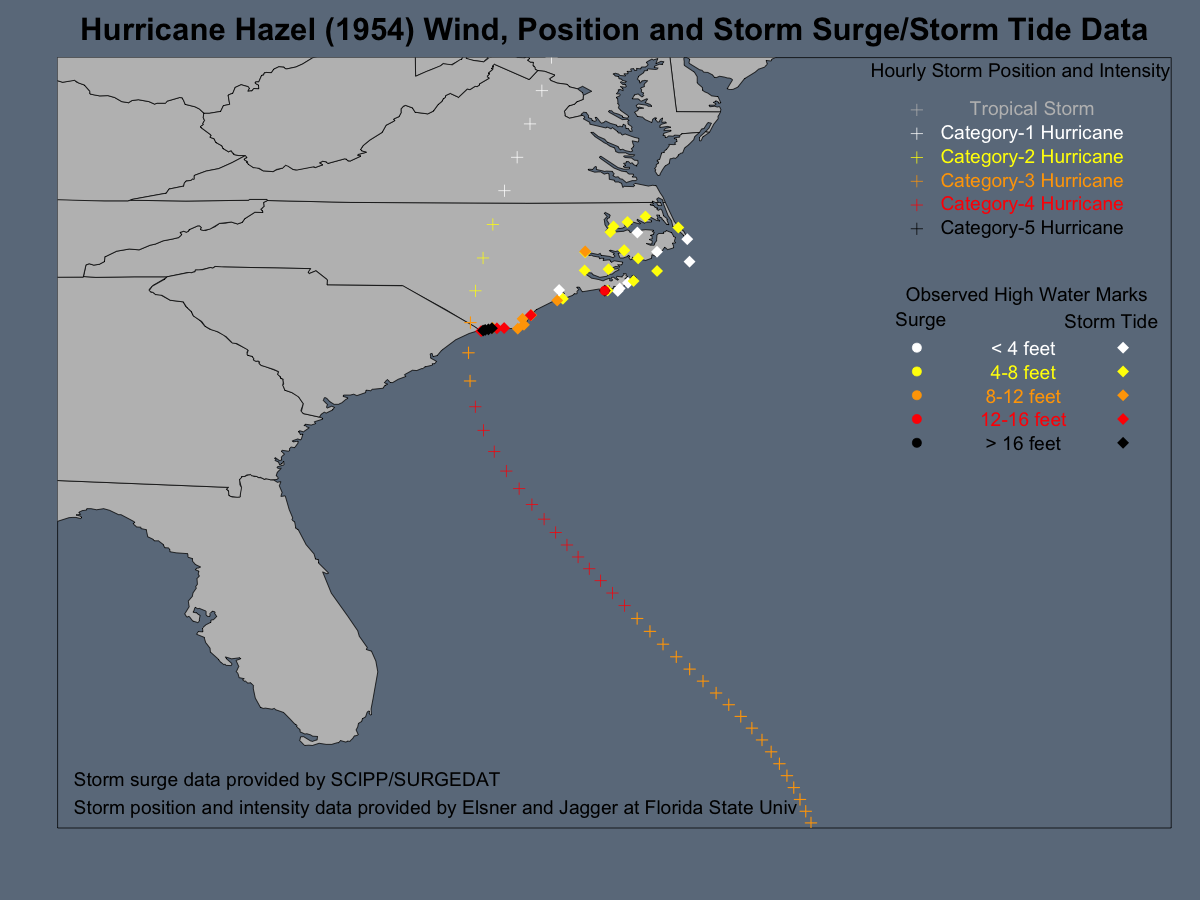 SCIPP map of Hurricane Hazel's track and storm surge/ storm tide observations in 1954. According to the Program for the Study of Developed Shorelines at Western Carolina University, Hazel's 18-ft storm surge was the highest in the history of North Carolina.