- We should not expect flood levels to approach anything similar to hurricanes Harvey (2017) or Ike (2008);

- Rainfall totals could exceed 8" in much of the Houston-Galveston metro area and exceed 6" in the Beaumont- Port Arthur - Orange metro area. Thunderstorms could produce as much as 2-3" of rain per hour...be careful if driving near flooded areas especially at night.

A disturbance approaching the western Gulf coast will bring substantial rain to the Upper Texas Coast and Metro Houston from Tuesday through Thursday. While this system will bring much-needed drought relief, areas of prolonged heavy rainfall could lead to street flooding and creeks/ bayous running over their banks. 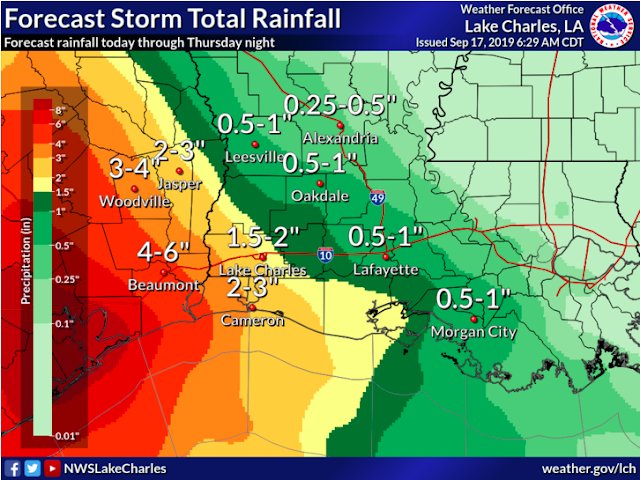 
The rainfall is associated with an upper level low pressure area. The National Hurricane Center forecasts a 30% chance that this system will develop a surface low and become a named tropical storm before it moves ashore. Whether it officially becomes a tropical storm or not, the main impact will be prolonged heavy rain.

The rainfall map above, provided by the National Weather Service Office in Lake Charles, Louisiana, forecasts more than 8" of rain possible for the Houston-Galveston corridor and Bolivar Peninsula, with 4-6" generally expected in the Beaumont-Port Arthur-Orange metro area. 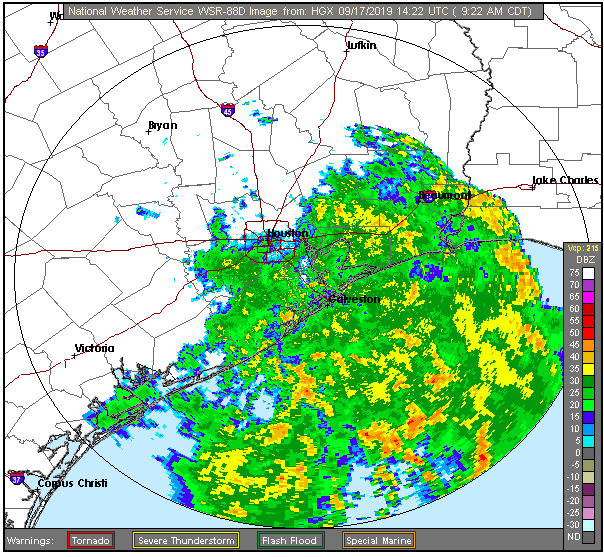 Some of the early banding of this system seems to indicate rainfall estimates may be higher than forecast for Beaumont-Port Arthur-Orange metro area, and I would not be surprised if some locations in that region observe rainfall amounts exceeding 6 inches.

Prolonged 15-25 mph winds from the southeast will generate minor coastal flooding along the Upper Texas Coast and Southwest Louisiana. Water levels at the Galveston North Jetty tide gauge have already exceeded 2 feet above normal astronomical tides. In general, we should expect storm surge levels to remain between 1.5 - 2.5 feet above normal for the next several days.

The graphic below, from NOAA Tides and Currents, shows the difference between observed (red) water levels and predicted (blue) water levels at Galveston North Jetty. We can see the prolonged nature of this "minor" coastal flood event.

While this amount of flooding will bring saltwater over some beaches and a few low spots on coastal roads, the biggest impact of a long-duration storm surge event like this comes from "compound flooding", as elevated salt water levels impede the drainage of heavy rainfall.

Elsewhere in the tropics, Hurricane Humberto is tracking to the east-northeast and may impact Bermuda this week. The only impact to the U.S. coast should be higher than normal surf and rip currents along the eastern seaboard. 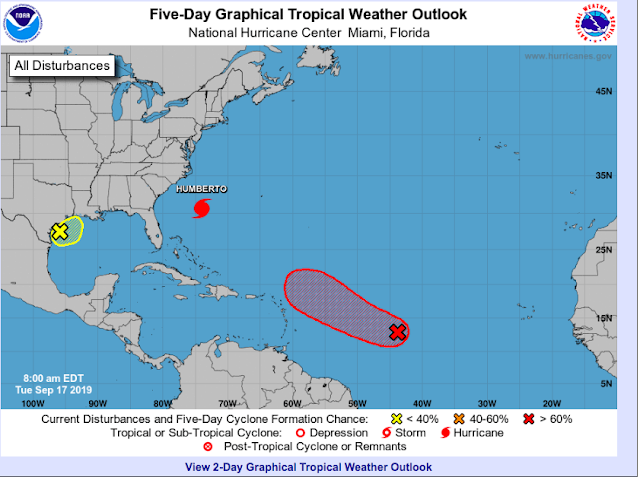 The National Hurricane Center forecasts a 90% chance that a disturbance between the Caribbean and Africa will develop into a tropical storm within the next 48 hours. It would be named Tropical Storm Imelda, but it will most likely track east of the United States.