An Overview of the Jersey Shore Flood

What happened?
A powerful nor’easter pushed a substantial storm surge into coastal communities along the Jersey Shore over the weekend. Footage of ice-choked water flowing into locations like Sea Isle City, Ocean City, and West Wildwood, New Jersey, surfaced on Saturday morning. 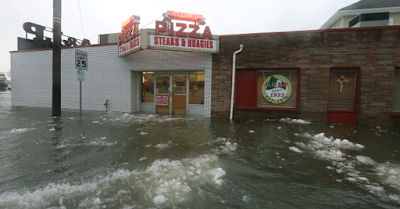 Was this worse than Sandy?
In terms of total impact, Superstorm Sandy inflicted much more damage along the New Jersey Coast. However, a few locations actually observed higher total water levels this past weekend than during Sandy.

The difference between the storms is that Sandy generated a higher storm surge, which is the amount of water actually pushed in by the storm. Sandy’s surge was high enough to push a massive amount of water and destructive waves over the beaches and dunes. The storm surge this past weekend was not as high, and beach replenishment projects proved their worth as they kept back sea water in most locations. 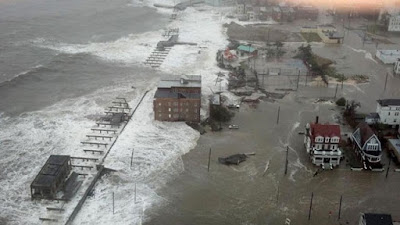 Superstorm Sandy's massive storm surge and powerful waves slammed the Jersey Shore with an all-out blitz from the sea. The surge and waves overwhelmed coastal dunes and other flood defenses. Image: http://www.zmescience.com/research/studies/hurricane-surges-worsen-future-climate-change-042342/.

However, storm surge of 3-4 ft (0.91 – 1.22m) arrived in time for Saturday morning’s high tide, which was close to the highest predicted tide level for the month. This enabled localized flooding to eclipse Sandy’s level in some locations, especially where water pushed in from the back bays.

Perhaps the biggest take home message from this weekend's flooding is that every storm is different. While this recent flood was not as bad as Sandy from a broad perspective, water levels surpassed Sandy's in some locations, and some homes that did not flood in Sandy flooded this past weekend. 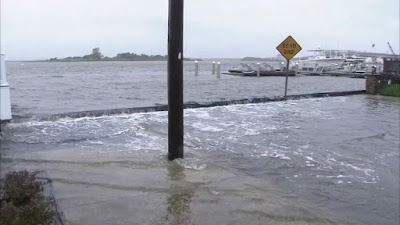 Back bay flooding was common in places like Ocean City, New Jersey, where water levels surpassed that of seawalls. Image: http://abc7ny.com/weather/photos-flooding-at-the-jersey-shore/1013740/.

One reason is that the storm surge hit near the time of full moon, which is the time of highest monthly tidal levels.  More accurately, tides near the time of full moon oscillate the most, so high tide tends to be higher and low tide tends to be lower. This means that water is moving in and out more quickly between tidal cycles. On Saturday morning water rushed in from the storm surge and approaching high tide at the same time, causing total water level rises of more than six feet in a few hours in some locations. 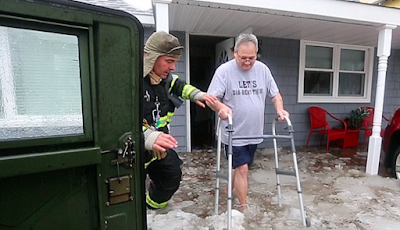 Water rescues became commonplace along the Jersey Shore on Saturday, as storm surge quickly rushed in from back bays. Image: AP.

The failure of flood control devices is another reason water can suddenly rush into a community. According to the NBC Nightly News, a flood control structure failed in West Wildwood, New Jersey, which led to a push of sea water into the community.

Is this climate change?
The Mid-Atlantic Coast has experienced substantial coastal floods over the past five years. Hurricanes Irene in 2011 and Sandy in 2012 generated widespread coastal flooding (Irene wasn't as bad in S. Jersey), and extra-tropical systems have flooded the region outside of hurricane season. An intense nor’easter flooded the region this past weekend in areas that flooded just last October from a prolonged onshore wind.

The high frequency of these flood events may feel very much like climate change. However, it’s important that we step back and make sure our perspectives are scientifically sound before we slap a climate change label on what appears like a certain pattern. 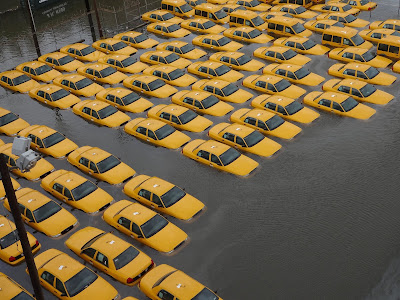 Hurricane Sandy inundated coastal New Jersey and New York with a massive storm surge in 2012. Was this a random event or part of a larger climate change signal? Image: http://wqad.com/2012/10/29/photos-from-hurricane-sandy/

Sea level rise is an important component of these floods, and that is a clear signature of climate change. For most of the U.S. coastline, sea-level rise is a persistent, long-term threat, with surprisingly pernicious impacts. In coastal New Jersey the rate of relative sea level rise is around 1.0 -1.5 ft per century. The graph below shows a rate of 1.34 ft per 100 years at Atlantic City. Although this rate may not sound substantial, the impacts of sea level rise are profound.

Even a few inches of sea level rise can lead to increased beach erosion, additional stress on sea walls and coastal flood defenses, and exacerbate flooding when accompanied by heavy rain. Rainfall runoff in most places is gravity-fed, requiring a slope to drain. Increased sea levels decrease this slope, slow the drainage, and exacerbate flooding, slightly inland and right at the coast. 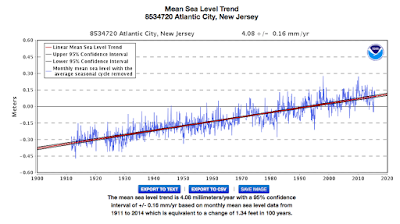 A detailed, scientifically sound study needs to be conducted to determine if the recent onslaught of strong storms in this region is random or part of a larger climate change trend. Climate change leads to changes in atmospheric and oceanic patterns, which can cause a lot more havoc than just warming the temperature of our backyard thermometer a few degrees. That said, clustering of storms is not uncommon. Dr. James Elsner of Florida State University has related this to hurricanes, saying that, "Florida tends to get hit in clusters."

Here are some examples of storm clustering, which later was followed by a long, quiet period:

1) In the 1880s and 1890s, South Carolina and Georgia were pounded by many intense hurricanes, but the region, especially Georgia, has been relatively quiet since 1900 (Hurricane Hugo slammed SC in 1989).

2) Tampa, Florida, observed two powerful hurricanes in 1848, producing two of the three highest recorded water levels within the same month. Surge levels reached 14 ft and 10 ft just a few weeks from each other. Since then, storm surge has not reached those levels, except for a 10.5 ft surge in 1921. 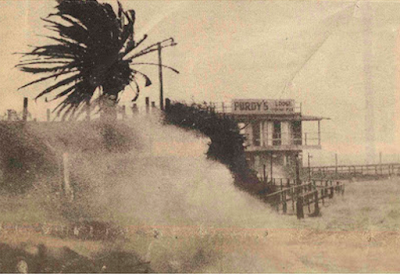 Hurricane Allen pounded the South Texas Coast with a massive storm surge and powerful waves in 1980. This flood event was part of a 20-year period of powerful storm surges in this region, but coastal floods in this area have had minor impacts since then. Image: http://maroonedinmarin.blogspot.com/2007/08/global-warming-being-blamed-for.html.

4) During the hurricane seasons of 2004-2005, seven hurricanes struck Florida. However, Hurricane Wilma (2005) was the last hurricane to strike the peninsula, as Florida has now experienced more than 10 years without a hurricane strike.

This topic of separating random variability from a long-term climate change trend warrants future research, as extreme weather events are costly and the science behind them is complex.
Posted by Hurricane Hal at 9:02 AM