Winter Storm Jonas is developing a deepening low pressure center off the Mid-Atlantic Coast this morning. Strong onshore winds have arrived earlier than originally forecast, enabling the storm to already generate a storm surge exceeding 3 ft (0.91m) in some areas. This is bad timing because this storm surge has arrived before the highest high tide of the day, which will occur over the next 2-3 hours in most locations. 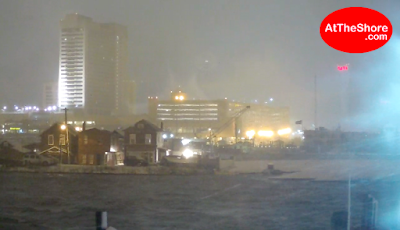 Here is a tabular update of what is happening, according to NOAA Tides and Currents:

My biggest concern is the rapid water level rise along the Jersey Shore, in places like Atlantic City. The highest high tide of the day, and one of the highest high tides of the month, will occur in the next hour at Atlantic City, which would have already created a high water event even if there was no storm. Much of the Jersey Shore will experience substantial coastal flooding today, particularly around the times of high tides.
Posted by Hurricane Hal at 5:14 AM